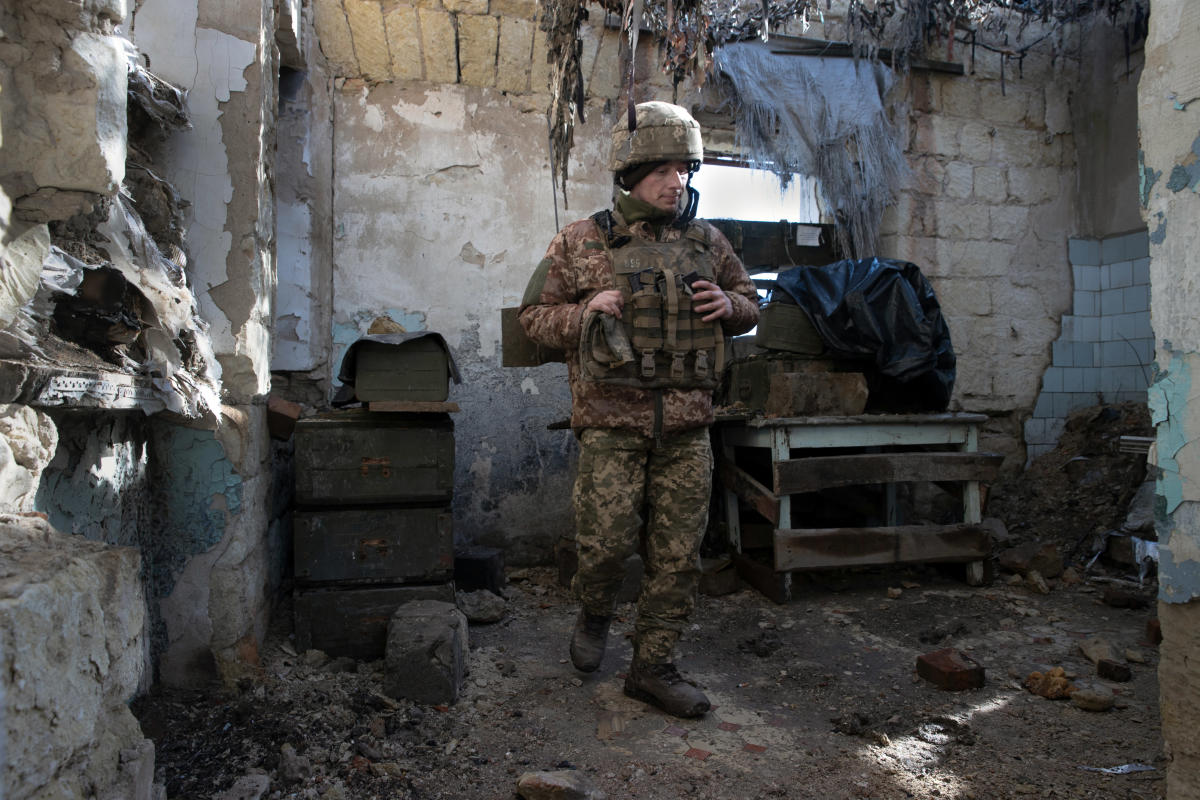 Why Ukraine Is Different

There have been dozens of wars in the almost 80 years since World War II ended. But if Russia invades Ukraine in the coming days, it will be different from almost all of them. It will be another sign that the world may be entering an alarming new era in which authoritarianism is on the rise...

What do we think? I mean, we're living in the middle of a pandemic. Let's add WW3 to the mix! /s

I haven't made up my decision on the matter in full yet, but it appears to me that Putin has decided that Russia is going to be our enemy again.

The Ukraine conflict won't start WW3, but any attack on any NATO member will and that includes the seemingly unimportant Baltic countries. I'm fully behind an application of sanctions on Russia, like banning all trade with them and with all those who trade with them (whatever the f*** WTO treaties might say), cancelling Nordstream2, blocking money transfers, freezing Russian assets out of Russia, no matter if private or stately property, blocking travel of any Russian to elsewhere etc. Perhaps not all of it at this point, so there's potential for additional pressure to apply if matters become worse.

I think that Putin has a majority of the Russian people behind him, so I don't have many concerns about putting all of them at a disadvantage. If there's anybody who can change the situation, then it's the people of Russia.
Reactions: superdave

We'll see what happens. It's kind of nerving. Kris, are you seeing gas prices go up over there? We're starting to see a tick up here. Dunno if it's related but it's something i noticed.

Gas price development in € in the last 30 days: 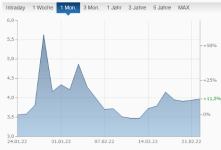 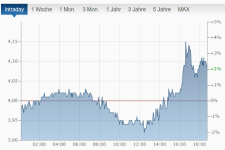 I'm using fuel oil which has the advantage that once you filled up the tanks, you already have it in advance, in my case for a whole year. Of course, prices might drop after having bought it, but they could also rise... which they did after I bought it last October.
Reactions: Leopold Stotch

krischan said:
I'm asking myself why @jmervyn hasn't poured his glee on me regarding Nordstream 2 yet
Click to expand...

Right??? I totally thought he would be up in this thread or would've started it. Maybe if we say his name three times?

While stripping naked in a pentagram and pouring the blood of a sacrificial goat over us?

Edit: No, better not. He might mock us for years for that.

krischan said:
While stripping naked in a pentagram and pouring the blood of a sacrificial goat over us?

You weirdos are always one hot take away from throwing @jmervyn in internet prison when he's around... and then when he's not you're ready to give him a handy. I think y'all just like drama!

Well, yes, our attitude towards jmerv has a slight masochistic element.

Regarding the topic, I'm a bit unsatisfied about the lack of action on our side. I was expecting a 100'% boycot on everything involving Russia and serious measures against those who don't boycot them as well, but it seems that some people are afraid of losing money. For example, Germany hasn't agreed to excluding Russia from financial transactions in general yet and Switzerland is playing the "we are neutral" card.

Well, at least Germany decided to deliver Panzerfausts rather than just (how embarrassing!) steel helmets. I don't think that any kind of delivery of weapons by us will change things to the better, but it's still better than nothing.

On the other hand, I guess that jmervyn will gladly recognize that Germany is going to fulfill the "2% of the GDP goes into the military" promise very soon. To this point, I didn't agree so far that it was necessary, but that we have to do it because we promised it. Now, we need it.

I think we are closer to Cuba in the 60s than we are currently aware of. I hope that the NATO stand is that if there's any attack on NATO members, it means WW3 in full. If the Russian army enters NATO territory, the nukes will be sent off, right?
Last edited: Feb 26, 2022

Yeah, because a nuclear winter is such a good perspective.

If any NATO member is attacked, sending nukes will seal the world's fate.

I think presidents or other state heads can think that far.

Putin is in a special position because he is old, maybe paranoid, in an echo chamber. Do you really want to put him to the test?

d2lover said:
Putin is in a special position because he is old, maybe paranoid, in an echo chamber. Do you really want to put him to the test?
Click to expand...

I'm not that educated in worldly matters or anything, but it kinda feels like 50/50? Maybe he is bluffing and maybe he's not. Either way, no one thinks the chance is worth it. Our President thought these sanctions were tougher than taking him off SWIFT but hey what do I know? Even if they are "tougher," I DOUBT this is going to deter him. He's gonna find some way to get money ("Hello, China? Bestie! How are you?") or just keep on with this.

I do feel like this is going to escalate. How is the big question.

And then my conspiracist side of me (indulged by my conspiracist bestie) is like "Biological warfare!! COVID-19 was just a test to see how it would affect people. The REAL COVID is in Russia's lab and they're just waiting to unleash it. . ."

On a fun little side note, was talking to my co-worker today and I brought this conflict up and I said, "Yeah, one theory about why he's doing this is because he wants to go back to the USSR days."

And he didn't seem to understand; like, he knew, but not really. So I said, "Soviet Union, you know, when we were kids." About a minute later, he tells me "I was born in 2000.

And it hit me just now: That little exchange I had with my coworker is going to happen more often as I get older. . .

It is never about money as a stand alone value, not in the eyes of a leader of a nation.

It's about resources, but I agree Asia has some of them.

I also fail to see the big resources of America, most of the stuff they have is from other countries resources.

We're actually sitting on quite a lot, but it's all tied up with environmental regulations and bans as a result of virtue signaling politicians trying to score points with the climate alarmists. (Not to mention the boatloads of money involved on all sides.)

At any rate, I doubt Putin is only interested in what's buried under the dirt over there. There has been plenty of indications over the years that give weight to the idea that he want's to restore the USSR.

By the way, Russia apparently just not so subtly threatened to drop the international space station on us in response to the sanctions.

So Germany's gonna give Ukraine weapons/help them out, Russia is being taken out/blocked from SWIFT now, and talks in Belarus with Ukraine and Russian delegates? Did I miss anything?

Russian planes are now banned from European airspace. All of them. Civilian and military.

China and North Korea are also taking the opportunity to cosy up to each other and get all giddy about there being a new global pecking order soon. North Korea, for their part, has already stepped up their ballistic missile testing and nuclear weapons development programs hoping that the Russia/Ukraine crisis will keep everyone else distracted.

So far, WW3 is right on schedule.

Question is: will Europe make it to the 2 degrees of climate change or not?

In my country, we are aware that anything hitting us will hit really hard. We have nuclear plants, including one really close to Paris. Other industrial complexes could be hit by anything and cause massive damage. In fact, to handle us, you just don't need any nuclear weapon, you just need some kind of explosions.

We are up to the step that if that war starts, it is basically over, for the very least for all central/eastern Europe, if missiles are intercepted early, but consequences will be global. Our societies here may not survive to the impacts on food availability, not even speaking of water pollution.

USA are somehow protected by the oceans, not from global impacts, but they can see some kind of attacks come. There's hope.

Europe has to take back her future in hand, if that's not already too late. Some countries started to understand that NATO protection can be a seen as a provocation, and the guy that sees that as a provocation is not a young guy with future, he is on the end of his life with the hope to bring back his country as the major actor it was. And may well blow it all if it turns into a failure, thanks to the nuclear legacy and late improvement.

Well, maybe it will turn better than how I see it going right now. But really I don't feel like doing much nowadays, having fun is hardly on my todo list...I am trying to have a president change here, but well...when you look at the news, you just want to stop and play with your kid(s) for the possible time left.

Just hoping I'm wrong enough for mine to have a future. Those days I'm not on a positive mindset.
Reactions: snickersnack and Leopold Stotch

I understand, Babyhell. Maybe not fully because I am in the US and have no idea what war in my homeland looks like (9/11 was scary enough. I can't imagine shit like that everyday) but I definitely hear you and see your concerns.
You must log in or register to reply here.
Share:
Facebook Twitter Reddit Pinterest Tumblr WhatsApp Email Share Link
Remove ads & support the site - Get PurePremium
Remove ads & support the site - Get PurePremium
Top Bottom