I know not many here are Christian, but Happy Easter in any event.

I'd be the last person to call myself a model church goer, and Easter isn't really a huge deal relatively speaking in my particular denomination. At least not locally. But come on. Chocolate bunnies and sugar coated marshmallows? How could anyone not want to celebrate Easter with those incentives? You know, provided you don't have a medical reason outright preventing it.

It's almost Jesus Zombie day! Sunday he rose from the dead.

From Twitter - "I don’t care who your father is. This gathering is illegal.” 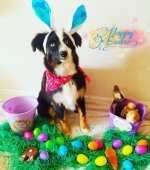 Glurin said:
I'd be the last person to call myself a model church goer, and Easter isn't really a huge deal relatively speaking in my particular denomination. At least not locally.
Click to expand...

Speaking of Christian understanding of Easter, & Christian belief in general, did you notice that Senator the Reverend Raphael Warnock of Georgia "Tweeted" heresy for Easter?

And here I thought I was a dunce for not knowing that Catholics believe Saint Mary was ALSO assumed into heaven, though she was supposedly dead at the time. Biblical literature only supports three examples (Enoch, Elijah, and The Dude Himself).

Yeah, I did see something about that. It's like, come on man. Some things are just gimmes. The religious meaning of a holiday is one of them.
Reactions: jmervyn

Well, in total fairness to the Reverend/Senator (or would it be Senator/Reverend?), a significant number of nominal "Christians" don't actually believe in Christianity per se.

Unitarians are a fine example. Warnock's "Social Gospel" crowd, which include Jim Wallis and Father Michael Pfleger (of Hillary mocking fame) are other fine examples of the "Jesus wasn't really God, or divine; he was just Super-Ghandi"... it fits well with Communism clad in Christian vestments and lends itself to Jesus being the ultimate community organizer.

Apparently many of these seeds are sown from the "Union Theological Seminary" here in New York, where Cornel West is currently teaching (I don't know if he's espousing a "healthy atheism" or something else).
You must log in or register to reply here.
Share:
Facebook Twitter Reddit Pinterest Tumblr WhatsApp Email Share Link
Remove ads & support the site - Get PurePremium
Remove ads & support the site - Get PurePremium
Top Bottom